What does one do if one has 12 hours transit in AMS? And if one has a Schengen visa? Of course go out and spend time in the city.

﻿
﻿
Amsterdam is one of the most exciting cities in the world. No matter how many times you visit, there will always be something new to discover.

Getting from Schiphol airport to the Centraal station is very convenient. The train station is below the airport and there are frequent trains. Once you get out of Centraal, you are in the heart of the city and the action.

Centraal station itself is a beautiful building.


Every city has huge car parks. Amsterdam is unique – it has bicycle parks and there are thousands of bicycles. I over heard a guide saying that there are 600000 bicycles in AMS; one for every person.


On the Saturday I was there, I saw thousands of people walking from the station down a road. So I decided to follow them as I guessed there was something happening. It surely is unusual to see so many people walking with determined purpose at 7 am on a Saturday morning. As it turned out, there was a walkathon organized from Dam to Dam (Amsterdam to Zandaan). Apparently 6000 people participated in the walkathon.

I followed the walkers for a while on their route which took them through the small streets of the city. Amsterdam is unique because it started off as a small settlement near the river Amstel. Over the centuries it grew to be an important trade centre. Today it truly is a global metropolis. There are over 1000 bridges linking the city which has many many canals running through it.


I am fascinated by the Dutch houses and am a keen collector of the little KLM houses. As I strolled leisurely through the city, I admired the beautiful houses – some very narrow, some ornate, some very old. It does intrigue you to wonder what goes on behind the facades. On an earlier trip I had taken a canal tour where they pointed out historical houses and explained that the houses were very narrow. Furniture had to be lifted up through cranes and taken into the houses through windows (and not the main front door). Therefore if you look carefully, most of the houses still have hooks at the top. I wonder if it still happens or does every use IKEA furniture? 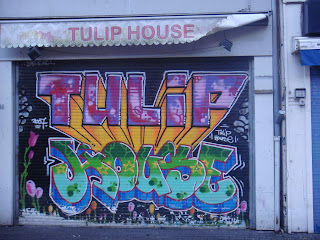 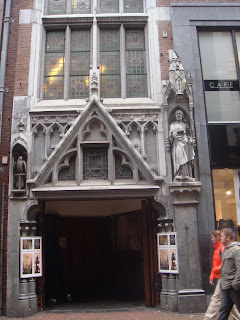 The church tucked away in the alley. But it is huge inside.

Luckily for me, Charlotte was free to meet me for lunch. She had classical singing classes in the afternoon. So it worked out perfectly for me that we got to spend sometime before she left for singing and I for the airport. We had apple and bacon pancakes. Never had the combination before but it was delicious.

At the airport, there is enough and more to keep one entertained. I love transiting through Schiphol airport. They have a smaller version of the Rijksmuseum where you can admire the Dutch masters.

And in the museum shop at the airport, I stumbled upon the Elephant Parade. In one of my earlier posts, I had written about the Elephant Parade in London. Amsterdam is another city that supports this project. However I only came across one elephant figure in the city.
www.elephantparade.com 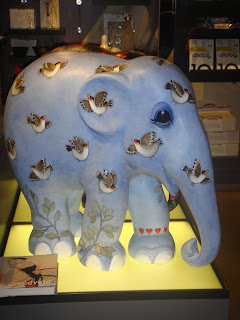 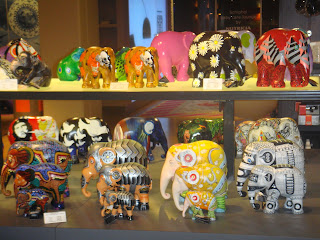 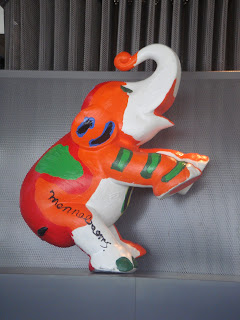 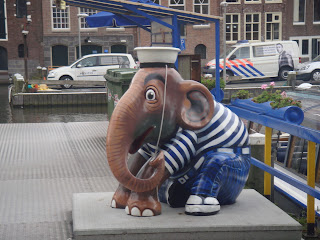 Airports generally tend to be uncomfortable. But not Schiphol. There are lots of shops and lots of restaurants. There is a lot of comfortable seating where one can read the Airport Library collection of books on Dutch culture. There is also a piano where passengers can play and entertain others while killing time for themselves. I was lucky that the people who chose to play whilst I was there were proficient and we were enthralled by lovely classical and pop music.

I was keen to see the Anne Frank museum on this trip, but unfortunately the museum was closed as it was a Jewish holiday. Disappointed I was but it just means that I will have to do it on my next trip to AMS.
Posted by Unknown at 4:00 PM No comments: